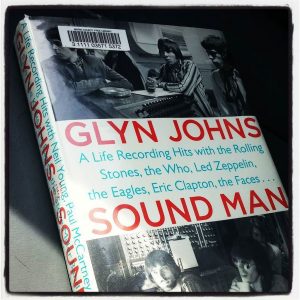 Glyn Johns has had a stunningly successful career as a music producer. For one thing, imagine that you have a technique for placing microphones named after you–that alone is somewhat impressive. Just Google “Glyn Johns drum mic technique,” and you’ll see what I mean.

Interestingly, as Johns describes in his book, the discovery of this mic placement method was stumbled upon–as the result of a significant mistake. And that mistake happened during the recording of Led Zeppelin’s very first album for Atlantic.

It’s just one of the fascinating tidbits from his autobiography.

But beyond just this influential microphone placement method for drums, there is his body of work and the many huge artists that he worked with. It’s kind of hard to argue the assertion that…

Simply consider who he’s worked with and what records he’s produced and it’s shockingly impressive. Here are a few of the artists: The Beatles, The Rolling Stones, Bob Dylan, The Eagles, The Steve Miller Band, The Who, Led Zeppelin and many others. 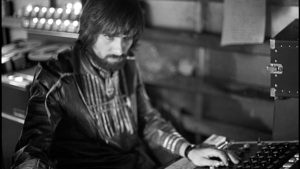 The stories I’m describing here can be found in Johns’ autobiography, Sound Man.

It’s not a particularly “deep” book. You won’t learn much about Johns’ personal life and you won’t hear his deep philosophical thoughts on life. But what you will read are many tales from his side of the mixing console. And for music fans, musicians, aspiring producers or audio engineers, that lack of depth or introspection won’t diminish the pleasure of hearing these tales from a life spent making music with rock’s royalty.

They are in no particular order. And don’t worry, I’m not giving everything away here; there’s plenty more in the book, but these 5 anecdotes will whet your appetite.

#1) Would You Turn Down the Chance to Produce The Allman Brothers?

Glyn Johns did. In fact, he was being offered the chance to produce their very first album. He flew down to Georgia to meet with them. He was invited to come to their studio to hear them rehearse. As Johns put it:

…they were not ready to make an album yet. It was very early days for them. They clearly had potential, but were still a little rough round the edges. For some reason they had decided to use two drummers in the band. This is not an easy thing to pull off, and they were still figuring out how to play with each other. This made the rhythm section quite stiff and unsettled, which was the reason I passed.

#2) Q:The Moral of This Particular Story? A: Clive Davis is a Dick

CBS Records had a policy of only allowing their staff engineers to work on the albums made by their artists. In addition, they paid less then any other record label at the time. These two things were enough for Glyn Johns to decide not to make any records for the company. Clive Davis, who ran CBS at the time (1970), asked Johns to meet with him in NY to try and persuade him to change his mind. Johns’ aversion to Davis is described eloquently in the following quote from the book:

This [editor’s note: Johns’ decision not to work for CBS] eventually resulted in me being invited to New York by Clive Davis in order for him to convince me that I was making a huge mistake by refusing to work for CBS. He was running the company and was well on the way to his “guru” status in the industry and more especially in his own eyes. I have never met anyone with quite such a high opinion of himself. He told me that even though CBS paid a third less than anyone else in the industry at that time I would make more money with them, as they sold more records than anyone else. Summoning teams of sycophantic administrators to unravel piles of royalty statements from Janis Joplin’s latest release on the desk in front of me in his palatial office to prove the point. I could not wait to leave, returning to my hotel feeling like I needed a long hot shower. All he managed to do was confirm that my original decision was correct.

This tale finds Jann Wenner and Glyn Johns returning from a trip in 1969 and arriving at NYC’s LaGuardia airport. Wenner was editing an interview he did with Bob Dylan while they were on their flight, so it was an interesting coincidence to run into Dylan himself as they went to get their luggage. Wenner introduced Johns and Dylan, and next–I honestly find this hard to believe–Bob supposedly pitches Johns on the idea of making an album with himself, The Beatles and The Rolling Stones.

Dylan, knowing that Johns has worked with both the Stones and Beatles, asked Johns if he can find out if there is any interest. According to Johns, some of the the members of each band were interested, but Paul McCartney and Mick Jagger both were clear in their lack of any interest in doing it.

If you wanted to grab my attention, the above sentence would be just the way to do it. And the story is all about drummers. Here’s what Johns writes:

My overriding memory of that evening is hearing the sound of drums being played in another room in the house. I went to investigate and found Keith Moon giving Ringo’s four-year-old son, Zak, a lesson. Zak idolized Keith, who was his godfather. Amazingly, twenty-five years later he took Keith’s place in The Who, being one of the few drummers in the world who could come close to filling his shoes.

#5) Glyn Johns and The Beatles: How Phil Ramone “puked all over” Let It Be

The story that Johns tells of his time with The Beatles revolves around Let It Be (originally planned to be titled Get Back). He got a call in 1969 to come to Twickenham Studios, a film production workplace where The Beatles had filmed A Hard Days Night and Help!

The Beatles were to rehearse there and get ready for an album and a performance that was to be filmed for a television special. The idea for the “Get Back Project,” as it was conceived by Paul McCartney, was that The Beatles were to “get back” to their rock roots. For perspective, the album that had most recently been released as they got together to rehearse was the White Album.

The rehearsals and everything else were to be filmed and Glyn Johns was called in to handle the audio. On receiving that call–from none other than Paul McCartney himself–Johns writes:

In December of 1968, while sitting at home on a night off, I answered the telephone to a man with a Liverpudlian accent claiming to be Paul McCartney. I thought it was Mick Jagger trying to be amusing, so I told him to stop messing about and asked him what he wanted. The man persisted, and much to my shock and embarrassment, it really was Paul McCartney. He told me that he had an idea for the band to write all new material and then record it live in front of an audience for a TV show and for release as an album. The venue was to be discussed, but it would be somewhere exotic. He then asked if I would be interested in making the record with them. I felt like I’d won the lottery. He told me that they were all to meet at a soundstage at Twickenham Film Studios on January 2nd, 1969, when they were to start rehearsals, and asked if I could be there.

I turned up on the appointed day with enormous anticipation. After all, they were the biggest band in the world and were at the height of their career. I had worked with many successful artists but I have to say, this was quite different. I have always loved vocal harmony and had constantly been blown away by the extraordinary sound that the blend of John, Paul, and George achieved. Add to that their songwriting and their reinvention of recorded sound, and you can imagine how I felt as I walked through the enormous doors of the soundstage at Twickenham that morning.

Johns continued to be involved in the project as it moved venues during its creation, and as the famous rooftop concert took place. He was asked at one point to make sense of all the recordings and create an album from everything. Here’s what happened after that:

Having delivered the mixed master of my version of Let It Be, I approached each member of the band separately, asking if I could have a production credit on the album when it was released. I made it quite clear that I was only asking for that and not a royalty. Paul, George, and Ringo had no objection to my request but John was suspicious and could not understand why I was not asking for a royalty. I explained that I felt, because of their stature, the sales of the album would not be affected by my involvement one way or another, so a credit would be a fair settlement for what I had done, as by association it could only be positive for my career in the future. I never got an answer from John.

As it turned out, none of this mattered, as in the end, after the group broke up, John gave the tapes to Phil Spector, who puked all over them, turning the album into the most syrupy load of bullshit I have ever heard. My master tape, perhaps quite rightly, ended up on a shelf in the tape store at EMI. At least my version of the single of “Get Back”/“Don’t Let Me Down” had been released in April 1969.

Johns’ stories about The Beatles are some of my favorite parts of the book. There are many more fascinating stories as well; some involve The Who, The Clash, The Rolling Stones and many others. I don’t want to give anymore of these tales away. I recommend that you buy the book and read it.

If you’re a producer or aspire to be one, this is required reading.